The correlation coefficient \(r\) doesn’t just measure how clustered the points in a scatter plot are about a straight line. It also helps identify the straight line about which the points are clustered. In this section we will retrace the path that Galton and Pearson took to discover that line.

As we have seen, our dataset on the heights of parents and their adult children indicates a linear association between the two variables. The linearity was confirmed when our predictions of the children’s heights based on the midparent heights roughly followed a straight line. Let’s see if we can find a way to identify this line. First, notice that linear association doesn’t depend on the units of measurement – we might as well measure both variables in standard units.

On this scale, we can calculate our predictions exactly as before. But first we have to figure out how to convert our old definition of “close” points to a value on the new scale. We had said that midparent heights were “close” if they were within 0.5 inches of each other. Since standard units measure distances in units of SDs, we have to figure out how many SDs of midparent height correspond to 0.5 inches.

We are now ready to modify our prediction function to make predictions on the standard units scale. All that has changed is that we are using the table of values in standard units, and defining “close” as above. This plot looks exactly like the plot drawn on the original scale. Only the numbers on the axes have changed. This confirms that we can understand the prediction process by just working in standard units.

15.2.2. Identifying the Line in Standard Units#

Here is a football shaped scatter plot with both variables measured in standard units. The 45 degree line is shown in red. But the 45 degree line is not the line that picks off the centers of the vertical strips. You can see that in the figure below, where the vertical line at 1.5 standard units is shown in black. The points on the scatter plot near the black line all have heights roughly in the -2 to 3 range. The red line is too high to pick off the center. So the 45 degree line is not the “graph of averages.” That line is the green one shown below. Both lines go through the origin (0, 0). The green line goes through the centers of the vertical strips (at least roughly), and is flatter than the red 45 degree line.

The green “graph of averages” line is called the regression line, for a reason that we will explain shortly. But first, let’s simulate some football shaped scatter plots with different values of \(r\), and see how the line changes. In each case, the red 45 degree line has been drawn for comparison.

The function that performs the simulation is called regression_line and takes \(r\) as its argument. In other words, we predict that the child will be somewhat closer to average than the parents were. This is called “regression to the mean” and it is how the name regression arises.

In the original units of the data, this becomes 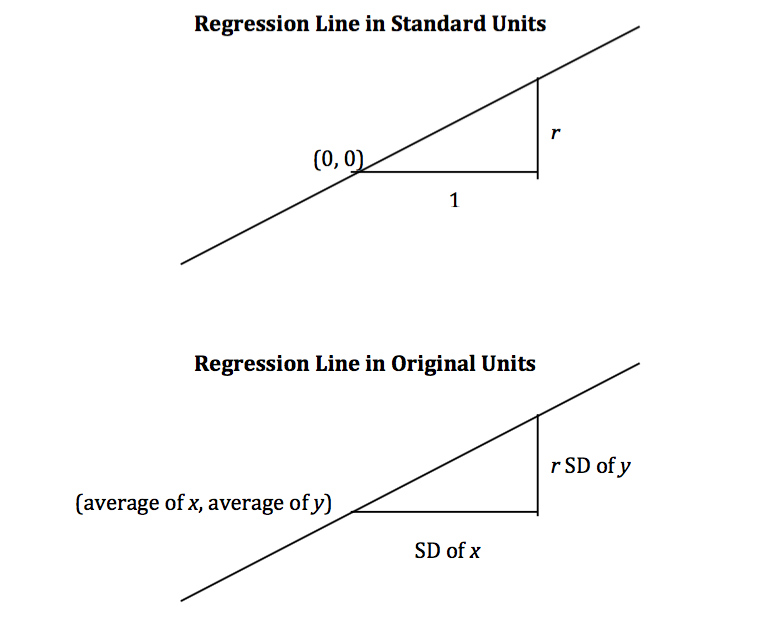 The slope and intercept of the regression line in original units can be derived from the diagram above.

The correlation between midparent height and child’s height is 0.32:

We can also find the equation of the regression line for predicting the child’s height based on midparent height.

The equation of the regression line is

For example, for a midparent height of 70.48 inches, the regression equation predicts the child’s height to be 67.56 inches.

Our original prediction, created by taking the average height of all children who had midparent heights close to 70.48, came out to be pretty close: 67.63 inches compared to the regression line’s prediction of 67.55 inches.

Here are all of the rows of the table, along with our original predictions and the new regression predictions of the children’s heights. The predictions all lie on the line and are known as the “fitted values”. The function fit takes the name of the table and the labels of \(x\) and \(y\), and returns an array of fitted values, one fitted value for each point in the scatter plot.

It is easier to see the line in the graph below than in the one above. Another way to draw the line is to use the option fit_line=True with the Table method scatter. The slope is a ratio, and it worth taking a moment to study the units in which it is measured. Our example comes from the familiar dataset about mothers who gave birth in a hospital system. The scatter plot of pregnancy weights versus heights looks like a football that has been used in one game too many, but it’s close enough to a football that we can justify putting our fitted line through it. In later sections we will see how to make such justifications more formal. pounds more than our prediction for the shorter woman.

Notice that the successive vertical strips in the scatter plot are one inch apart, because the heights have been rounded to the nearest inch. Another way to think about the slope is to take any two consecutive strips (which are necessarily 1 inch apart), corresponding to two groups of women who are separated by 1 inch in height. The slope of 3.57 pounds per inch means that the average pregnancy weight of the taller group is about 3.57 pounds more than that of the shorter group.

Suppose that our goal is to use regression to estimate the height of a basset hound based on its weight, using a sample that looks consistent with the regression model. Suppose the observed correlation \(r\) is 0.5, and that the summary statistics for the two variables are as in the table below:

To calculate the equation of the regression line, we need the slope and the intercept.

The equation of the regression line allows us to calculate the estimated height, in inches, based on a given weight in pounds:

The slope of the line is measures the increase in the estimated height per unit increase in weight. The slope is positive, and it is important to note that this does not mean that we think basset hounds get taller if they put on weight. The slope reflects the difference in the average heights of two groups of dogs that are 1 pound apart in weight. Specifically, consider a group of dogs whose weight is \(w\) pounds, and the group whose weight is \(w+1\) pounds. The second group is estimated to be 0.2 inches taller, on average. This is true for all values of \(w\) in the sample.

Even though we won’t establish the mathematical basis for the regression equation, we can see that it gives pretty good predictions when the scatter plot is football shaped. It is a surprising mathematical fact that no matter what the shape of the scatter plot, the same equation gives the “best” among all straight lines. That’s the topic of the next section.