The key to the analysis of randomized controlled experiments is understanding exactly how chance enters the picture. This helps us set up clear null and alternative hypotheses. Once that’s done, we can simply use the methods of the previous sections to complete the analysis.

Let’s see how to do this in an example.

Low-back pain in adults can be very persistent and hard to treat. Common methods run the gamut from corticosteroids to acupuncture. A randomized controlled trial (RCT) examined the effect of using Botulinum Toxin A as a treatment. Botulinum toxin is a neurotoxic protein that causes the disease botulism; Wikipedia says that botulinum “is the most acutely lethal toxin known.” There are seven types of botulinum toxin. Botulinum Toxin A is one of the types that can cause disease in humans, but it is also used in medicine to treat various diseases involving the muscles. The RCT analyzed by Foster, Clapp, and Jabbari in 2001 examined it as a treatment for low back pain.

Thirty one patients with low-back pain were randomized into treatment and control groups, with 15 in the treatment group and 16 in control. The control group was given normal saline, and the trials were run double-blind so that neither doctors nor patients knew which group they were in.

Eight weeks after the start of the study, nine of the 15 in the treatment group and two of the 16 in the control group had pain relief (according to a precise definition used by the researchers). These data are in the table bta and appear to show that the treatment has a clear benefit.

So the indications are that botulinum toxin A did better than the saline. But the conclusion isn’t yet a slam-dunk. The patients were assigned at random into the two groups, so perhaps the difference could just be due to chance?

To account for this possibility, let’s start by carefully setting up the chance model.

Thus there are 31 potential treatment outcomes and 31 potential control outcomes. The question is about the distributions of these two sets of 31 outcomes each. Are they the same, or are they different?

We can’t answer this just yet, because we don’t get to see all 31 values in each group. We just get to see a randomly selected 16 of the potential control outcomes, and the treatment outcomes of the remaining 15 patients.

Here is a good way to visualize the setting. Each patient has a two-sided ticket: 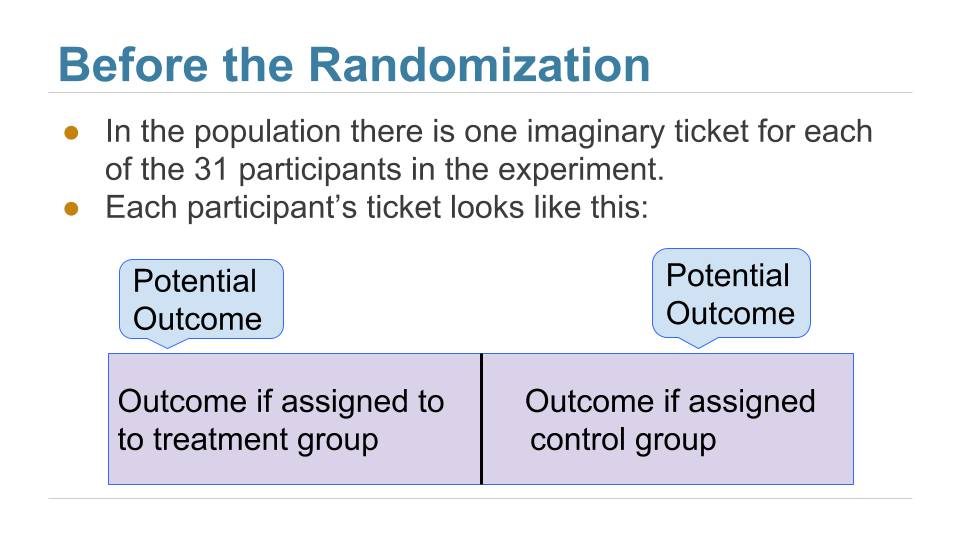 After the randomization, we get to see the right half of a randomly selected set of tickets, and the left half of the remaining group. 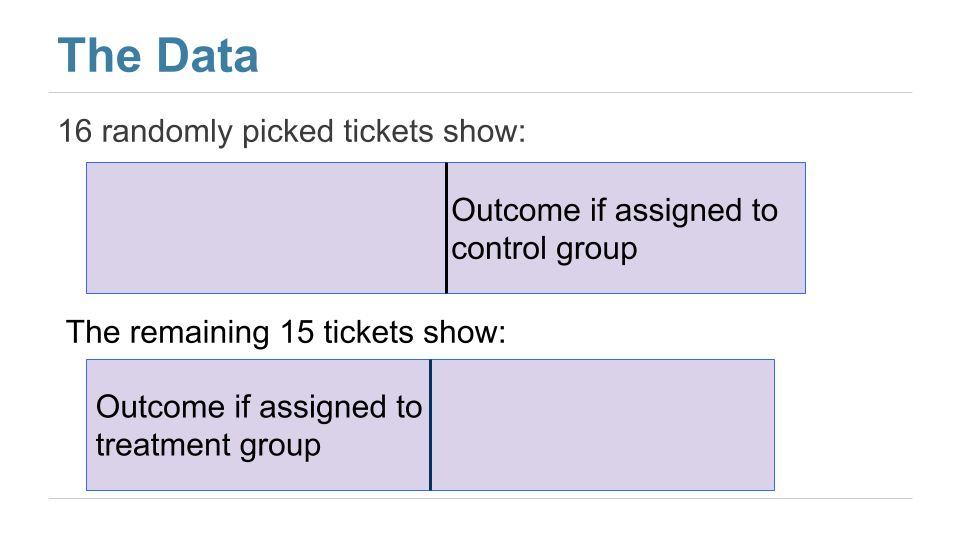 The table observed_outcomes collects the information about every patient’s potential outcomes, leaving the unobserved half of each “ticket” blank. (It’s just another way of thinking about the bta table, carrying the same information.)

The question is whether the treatment does anything. In terms of the table observed_outcomes, the question is whether the distribution of the 31 “treatment” values in Column 1 (including the unknown ones) is different from the distribution of the 31 “control” values in Column 2 (again including the unknown ones).

There are 31 observed outcomes jointly in the two groups. If the null hypothesis were true, it wouldn’t matter which of those 31 outcomes were labeled “treatment” and which “control.” Any random subset of 16 out of the 31 values could be called “control” and the remaining 15 “treatment”.

That’s exactly what we did for A/B testing in the previous section. Sample A is now the control group and Sample B the treatment group. We will carry out the test below showing the details of all the steps. You should confirm that they are the same as the steps carried out for A/B testing.

Large values of the test statistic will favor the alternative hypothesis over the null.

As we have done before, we will define a function that takes the following arguments:

and returns the absolute difference between the two group proportions.

12.3.5. Predicting the Statistic Under the Null Hypothesis¶

The simulation follows exactly the same process we used in the previous section. We start by randomly permuting the all group labels and then attaching the shuffled labels to the 0/1 results.

We can now find the distance between the two proportions after the group labels have been shuffled.

This is quite different from the distance between the two original proportions.

If we shuffled the labels again, how different would the new distance be? To answer this, we will define a function that simulates one simulated value of the distance under the hypothesis of random draws from the same underlying distribution. And then we will collect 20,000 such simulated values in an array.

You can see that we are doing exactly what we did in our previous examples of the permutation test.

The array distances contains 20,000 values of our test statistic simulated under the null hypothesis.

To find the P-value of the test, remember that large values of the test statistic favor the alternative hypothesis. So the empirical P-value is the proportion of simulated statistics that were equal to or larger than the observed statistic.

This is a small P-value. The observed statistic, shown as the red dot below, is in the tail of the empirical histogram of the test statistic generated under the null hypothesis.

The result is statistically significant. The test favors the alternative hypothesis over the null. The evidence supports the hypothesis that the treatment is doing something. Because the trials were randomized, the test is evidence that the treatment causes the difference. The random assignment of patients to the two groups ensures that there is no confounding variable that could affect the conclusion of causality.

While the RCT does provide evidence that the botulinum toxin A treatment helped patients, a study of 31 patients isn’t enough to establish the effectiveness of a medical treatment. This is not just because of the small sample size. Our results in this section are valid for the 31 patients in the study, but we are really interested in the population of all possible patients. If the 31 patients were a random sample from that larger population, our confidence interval would be valid for that population. But they were not a random sample.

In 2011, a group of researchers performed a meta-analysis of the studies on the treatment. That is, they identified all the available studies of such treatments for low-back pain and summarized the collated results.

There were several studies but not many could be included in a scientifically sound manner: “We excluded evidence from nineteen studies due to non-randomisation, incomplete or unpublished data.” Only three randomized controlled trials remained, one of which is the one we have studied in this section. The meta-analysis gave it the highest assessment among all the studies (LBP stands for low-back pain): “We identified three studies that investigated the merits of BoNT for LBP, but only one had a low risk of bias and evaluated patients with non-specific LBP (N = 31).”

Putting it all together, the meta-analysis concluded, “There is low quality evidence that BoNT injections improved pain, function, or both better than saline injections and very low quality evidence that they were better than acupuncture or steroid injections. … Further research is very likely to have an important impact on the estimate of effect and our confidence in it. Future trials should standardize patient populations, treatment protocols and comparison groups, enlist more participants and include long-term outcomes, cost-benefit analysis and clinical relevance of findings.”

It takes a lot of careful work to establish that a medical treatment has a beneficial effect. Knowing how to analyze randomized controlled trials is a crucial part of this work. Now that you know how to do that, you are well positioned to help medical and other professions establish cause-and-effect relations.